Today I came across a topic that is rather fascinating, that being the role that music can play in diminishing the apparent effects of Alzheimer's and dementia upon patients. One of the first places that I first read of this idea was in a great book that I thoroughly enjoyed called "Musicophilia." If you have never read this book, and have any remote interest in music and the brain, I suggest you just stop reading this post right now, and go order this book:

If you have never heard of the author, Oliver Sacks, I recommend that you take a read over the story of his life in the brief biography that can be found on Wikipedia; he has quite an interesting story.

This book by Oliver Sacks was the first place that I read of the idea that the use of music to show signs of recall in patients who seem to have dementia/Alzheimer's. The music ultimately acts as a trigger to memories, and with the activation of memories comes the recollection of names/vocabulary in general. Take a look at this video to see a great example of how music can assist those with dementia/Alzheimer's:

Note the incredible difference between this man's extent of vocabulary at the beginning, and the end of the video. The difference between the two is incredible. There is new research that may explain his behaviour, as the University of Utah has published some findings that suggest that the brains of people with Alzheimer's and dementia, while they may lose significant components of their memory, seem to hold on to many areas of their brain associated with music, and it seems relatively untouched by the dementia/Alzheimer's.

The Benefits of a Digital Sabbath? Ask a Mediatrician.

Digital Sabbath. Digital fasting. Digital Ramadan. Digital Lent. The first of these four was a component in a presentation I was at this last week that really stuck with me. Then, between discussion with some colleagues who found this presentation as riveting, we discussed some other possible means by which we could decrease the use of digital media; not only by regulating ourselves, but setting the bar within our families in which everybody needs to follow suit.

This outstanding presentation given by the Mediatrician, Dr. Michael Rich; Dr. Rich is a leader within (or perhaps simply, the leader of) an organization called the Center on Media and Child Health. As mentioned above, the idea of a digital sabbath was just one of many ideas he had in his presentation, but it is truly the one that stuck with me. I think part of this is that even though I do not practice any particular religion, I have many memories from my childhood of Sundays. Why Sundays? Until I was about 10 years-old, all the stores were closed on Sunday. This essentially resulted in days in which families spent time together, as nobody in the family could be working. These Sundays were always the days where public skating rinks were the busiest, or the bike paths in our city were filled with traffic. We truly took a break from the routines of Monday-to-Saturday. While I have no issues with stores operating on Sundays now, (I'd be quite hypocritical to critique that) I am aware of a good number of locally-owned stores that close one day each week; for most stores it is Monday or Tuesday. It makes sense, they need a break from their work.

Why can we not do this with our digital devices?

Can you imagine how a day without digital devices might feel? I'm not suggesting that we start out by practicing this once-a-week for the remainder of our lives, but what if we could initially try this by having one day a month as such? Or what about some other possible approaches as mentioned by some of my colleagues?

I want to close by recommending that you take a look at the Mediatrician's website. While this post may not be looking at the brain in particular, there are many of my previous posts that have discussed the effects of screens and media on the brain, and here is a new perspective for parents like myself who are trying to find means by which to effectively find a level of moderation for their kids and media, ultimately for the sake of their brains:

The best advice, says Rich, is the same advice he’d have given any parent any time—even before the age of television: “Talk with your kids. Ask them about what they’re doing, and join in when you can. And share with them your favorite media—books, music, movies, games, TV.” After all, he points out, children left to their own devices will eat nothing but cake and cookies. Influencing their media diet is as doable as guiding their food choices. And if he and his colleagues “do our jobs,” he declares, parents will have a much easier time deciphering the menu.


Taken from "The Mediatrician," found in Harvard Magazine, November-December 2011.


To conclude, here is a brief video of the Mediatrician's in which he discusses the effects of multitasking on the brain. I recommend it as a start point to begin thinking and reflecting on your kids (or students) and the permission of multitasking.

In the previous post a brief explanation of melatonin and cortisol was given to help give an explanation to the origin of our sleep cycles. In this post I am not going to give a lecture on when you (and your family) should and shouldn't view computer/TV/smartphone screens for optimal health. This post a a brief explanation simply of what screens do to the brain, notably in the later evening. Hopefully you can derive what is best for you and your family as far as time to view screens from these few brief points regarding screens and the brain: 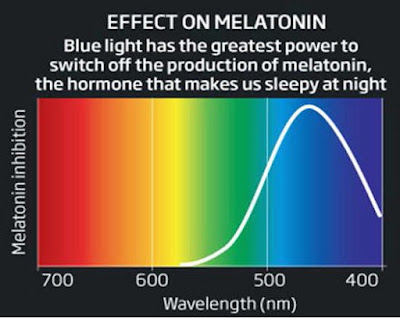 The brain's alarm clock and lullaby song - cortisol and melatonin.

How did you wake up this morning? It is a Thursday to me, and fortunately I have my five year-old (biological alarm clock) who still wakes up very reliably between 6:20-6:45 every morning. He has a very stabilized circadian rhythm, or circadian clock. Had he not awoken me, my alarm was set to go for 7:00. Would I have waken up at 7:00 without an alarm? So how does our sleep cycle work with the help of two hormones, and what can we do to get a good balance between those two hormones, cortisol and melatonin? I hope to look into a number of questions regarding sleep and our brain, and discuss two key hormones in this post. Let's start by looking at a typical daily graph of these two hormones: 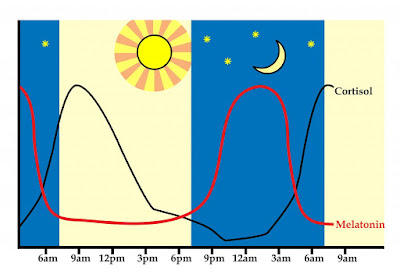 As we can see in the graph above, when comparing the two hormones, melatonin appears to rise and fall at a sharp rate, whereas cortisol seems to escalate and then drop off more gradually. This can be seen very easily in individuals who have a very rhythmic pattern of sleeping. Not to pick on him, but my son rarely steps outside of the 19:30 - 20:00 window to fall asleep, and as a result, has 6:20-6:45 very consistently as a time to wake up. He likely has a very consistent graph that would look something like that above. Unfortunately, as we leave childhood, many of us, for a myriad of reasons, seem to allow our circadian rhythm to become far less predictable and consistent.

There are many ways by which we (notably starting as teens, and continuing into adulthood) can modify these levels which can ultimately result in less efficient means of sleeping:


Please contact me if you have any key points about either cortisol or melatonin that you think should be added to the list of points above, and if you haven't already watched it, I hope you can take some time to watch this show! 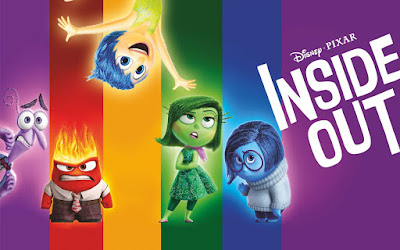 *Note: The diagram used at the top was taken from this blog posting that has ten pieces of advice regarding healthy sleep patterns.
Posted by Nate at 2:38 PM No comments:

Neurotransmitters and parts of a vehicle -- Part II 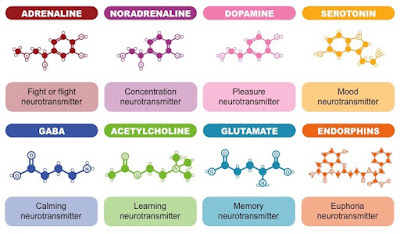 
Histamine
Serotonin
Posted by Nate at 9:15 PM No comments:

Neurotransmitters and components of a vehicle.

As a high school teacher, I find one of the most difficult concepts to truly have students comprehend is that of how electricity works, and what each electrical unit describes. One analogy that usually helps is one that relates electricity to water. The diagram below is one I frequently like to use: 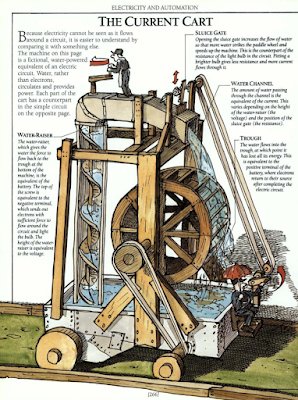 When presenting on the brain, it becomes difficult to go into too much depth without bringing the basic neurotransmitters into the picture. Being much like electricity, neurotransmitters operate at such a minute level that we never really get to see how they work first hand. An analogy that works well (and is perhaps quasi-plagiarism from David Macaulay and his diagram above) is how I like to compare the neurotransmitters to components of a vehicle:


2. Epinephrine
3. Norepinephrine
Beginning to understand those three neurotransmitters is a key first step in understanding both how a healthy brain operates, but also what can be the origin for many disorders. Sometime in the near future I will give a brief explanation of one more neurotransmitter, serotonin, and two hormones that from many perspectives can be seen working much like neurotransmitters: melatonin and cortisol.

We often talk about testosterone in males, and perhaps not quite as often, estrogen in females. This is a great episode of Quirks and Quarks in which Bob MacDonald interviews a researcher who has looked at the effects upon the brain, (and resulting sexual behaviours,) of both women and men with low vs. high testosterone levels, and the difference in the perceived attractiveness of females who have high vs. low estrogen levels.

Relating to the previous post, he discusses how we have evolved out of high-dependence upon our olfactory lobe, but that female brains "light up" the more the odour of their partner is a contrast to their natural order, and this is an attraction that promotes genetic diversity.

Near the end (15:00), there is discussion of how our brain is able to become chemically dependant upon sex based on the the chemicals it releases, and the importance of oxytocin and vasopressin in relationships.  Could we have genetic variance that results in some people being more genetically suited for monogamy? 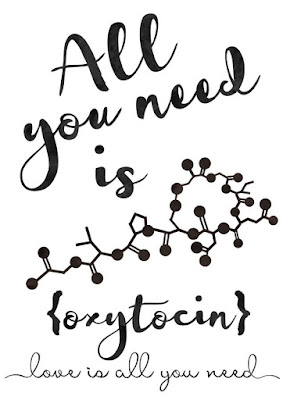