How I came to have an interest in neurology.

As mentioned in a previous post, I grew up with epilepsy, and grew up learning how to live with it.  I had very little interest in the brain, regardless of the fact that it played a role in my life that made my life very different than that of others. With homonymous hemianoptic vision (see sample 4 below), my vision only seeing 90 degrees to the left, I could competitively play sports like basketball until about grade 8, when students with 180 degree vision had a significant advantage over me. There began to be many places in life where those without epilepsy had an advantage. As many of my friends and peers attained their Learner's Licenses and then Driver's Licenses, I continued to have seizures, so this was not possible. 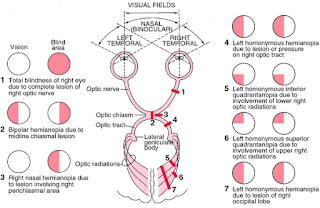 My interest of the brain remained somewhat subdued throughout high school (likely due to how well I did in the maths and mathematical branches of science) and remained subdued throughout my years as an undergraduate; I slowly was able to return to the maths and sciences was the years passed from my surgery. Interestingly, it was likely these years in which my brain didn't seem able to handle some of these high-level maths and sciences that my musical abilities flourished.

It wasn't until I was about 30 that I really started to become interested in neurology. I had been teaching for two years at a middle school when I frequently found myself asking,  "What is going on in these students' minds?" and "Why would students act such ways?" and while many people like to leave it as just the behaviour of adolescents (which is incredibly difficult to understand, no doubt) I truly had an interest to look into the area of neurology. A colleague, and former teacher of mine was taking a course at that time in neurology, and no less than a year later I was signed up to take the first course in a Master's programme. At that time I was quite sure that this neurology course was the only one I would take. While there is no doubt that this neurology course was the the course I enjoyed most in my Master's programme, I stuck with it, and discovered ways to make all Master's courses that I took pertinent to neurology. And thus, at the age of 28, began my venture into the field of neurology.

At the age of 28 I'd been teaching for about three years, and at this time, while creative in some of the methods by which i taught, I really hadn't put too much wonder or curiosity into how each and every brain that I taught was significantly different than mine. It wouldn't be until part way through my Master's study that I would find  it easier to understand the differences of every student's brain from my own. That is a topic that some (or possibly a majority) of educators have a difficult time to deal with--conceptualizing that every student's mind is significantly, not moderately, different than our own.
Posted by Nate at 1:35 PM