Three games with grids and tokens.

The brain loves returning to familiarity while being intrigued to explore new ideas. This can be shown from everything from taking a vacation somewhere new, (and then comparing it to similar previous vacations) or learning to play a new instrument (and linking its similarities to an instrument one already knows). When we choose to try to learn something brand new (that we make few associations with), it can often be far more tedious to our mind due to the lack of links, or associations, that we can make.

Many times there are similarities and associations between games, and for this reason, while we are often interested to learn something new, the vast majority of people will return to a game such as Monopoly (which according to this article, ranks down there with Candyland and the Game of Life).  There are a great many number of games that rely on a grid, games like Scrabble, Battleship, and Blokus, and yet the degree of association between those three is somewhat minimal. Here are a family of three games that I believe are somewhat related, thereby allowing association to develop from one to the next.

Sequence
This game really brings in the associative premise, due to our familiarity with a deck of cards. Somewhat similar to tic-tac-toe, the idea behind Sequence is that you are simply trying to create a line of five consecutive chips horizontally, vertically, or diagonally.  Many of the benefits of the center of the board in tic-tac-toe can be seen in this game as well, yet instead of your mind exploring  placing any location to place an X or O, you are limited to 7 (or less, depending how many people are playing) cards, with each card having two spots on the board--a fraction of where you can start a game of tic-tac-toe. One-eyed Jacks and Two-Eyed Jacks each play their special role in this game, and yet all one is seeking to do is make a line of five chips. Not only does this game have far more luck as a component, but it also brings in suspense, which to many people brings a greater interest in the game. 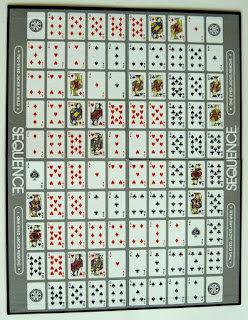 The lack of not knowing, hypothesizing on what an opponent might have, and then being correct or close on your guess can reward the mind in moderate means with the release of dopamine. At the same time, this game can teach planning, organization, and patterns to the mind after just a few games. If you have a child who is five or older and have never played this game, I'd go out, get it, and learn it together. My son started playing this when he was about five, and still to this day tries to pull it out at least once a week.

Othello/Reversi
I believe Othello was perhaps created by a checkers player who just felt that twelve chips weren't enough. It is a great game for really training spatial analysis, and yet a game never takes very long.
I will save much more talk, as this video seems to sum it up really well.

One interesting comparison I will make about this game, is that it may make a testimony as to why games are rated for age; while my son has difficulty spotting where would be the best place to play, my seven year-old daughter will almost always place the chip in a legitimate location; more often than not a location that is an ideal location to play.

GO
Long before the invention of Pokemon Go, where you seek to find creatures in augmented reality via GPS and video-overlay, there was GO. Which I'm quite certain is both simpler than Pokemon Go, and a superior game. While young children may have a difficult time really posing a threat to defeat adults at a game of GO, it is a simple game--once you can get over the three basic words of Atari, Liberty, and Ko, you are ready to play GO. I didn't give this video a full preview, but he has a great tie, and a giant magnetic GO board, so he must know what he is talking about.

GO made some headlines in March this year when Google's computer AlphaGo defeated the Grandmaster Lee Sedol in a 5-game tournament, 4-1. While computers defeating us at chess seem to make sense, as they are just processing every permutation and combination, it is hard to believe that this computer possibly began to get a sense for how his opponent was deciding to play; the permutations and combinations in GO are exponentially higher than chess. Perhaps that's why 1200 CPU's were used to compete against Sedol. Perhaps that is the equivalent of the human mind when playing a game like GO?

If you've never tried the game, there must be a myriad of online versions. I remember just trying it for the first time last year, just after learning about the championship mentioned above. While I do see the mind associating it with the first two games, it is leagues ahead in complexity of play, and I'm going to predict that while perhaps a version with a much smaller board could be played with people of younger ages, the larger boards are likely to be reserved for people of older ages whose minds can make the spatial conceptualization much better.