Olfacoception - a brief overview. (or, "How does smell work, neurologically?")

In the field of neurology, smell is such an interesting anomaly. To adults, having smell does clearly serve purposes--allow us to smell food, alerts us that something may be burning, or tells us that we need to change a diaper. So why does smell start out as one of the (if not the single) most important senses that we then allow to regress?  The answer to that is simple--the degree to which we depend on it. While at birth we are relying upon smell to find milk, by the time our eyes have learned to focus, we find it much more easy to visually identify milk instead of smelling for it. (Not to mention that the smell may be somewhat sealed when in a bottle.) 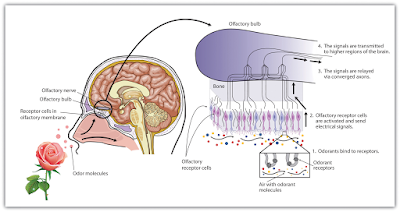 Where can this come into play in the classroom, that is a bit of a difficult question. In a class where there odour usually takes a very small role, maybe it could begin to be experimented with. An example I will use is that of the degree to which the various components in grade 11 biology where they are learning about cellular respiration and then photosynthesis, all at a cellular/molecular level. Is there a chance that you could be burning one candle while teaching cellular respiration and then a candle with a very different odour when teaching photosynthesis? This is something I may put to the test this year.

To hear interviews with Dr. Keller, the lead researcher in the study that theorized we smell over 1 trillion different odours, click on this link: