Research regarding excessive television viewing and the brain.

If you go back a "couple" years, you may remember reading this poem: 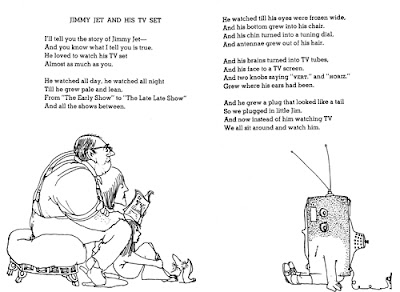 While I can't remember which of the Shel Silverstein books it comes from, when I recently finished reading about new research in the field of neurology and television viewing, it was one of the first things I thought of. How far from the truth was Silverstein? New research is beginning to state that as we watch more and more TV, the more one can argue we become one. This research suggests that excessive TV watching results in:


It is key to note that this research by Hikaru Takeuchi at the University of Japan does come with some benefits to those who watch excessive amounts:
While the researchers used children aged 5-18 and placed them in interval categories of watching from 0-4+ hours of TV, they did find that with those benefits, came lack of development in areas involving intellect.

Another study, collaboratively by the University of Nebraska Omaha and Florida State University found that when they undertook similar research upon about 3 000 pairs of siblings, that genetics significantly shapes the brain, and as a result behaviour towards likelihood to watch TV. They concluded that genetics accounts for about half of the predisposition towards being addicted to watching TV.

If this second article begins to question the degree to which genetics related to the development of the brain create a natural predisposition to watch more or less TV, it is still struggling to say that TV has no net negative effect. When looking at the first article, there were five key negative points to watching TV extensively, and two key positive ones. This brings us to the hypothesis that I think most have come to accept: while TV in moderation may not have negative effects upon the brain, there are so many activities (e.g. music-based, sport-based, creativity-based) that allow for positive growth in the brain while TV viewing allows the brain to enter a dormant state that results in minimal growth.
Posted by Nate at 8:01 PM